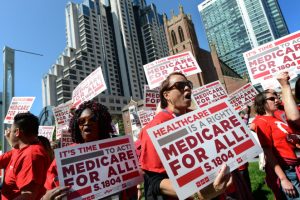 A recent post by Cassie Ito on her Facebook page arguing for a Single Payer health care system for California of course solicited some comment from me and, inevitably some replies.

One such replies was detailed and extensive and deserves a considered response by me and I quote:

“This is a neoliberal (every man for himself, I’ve got mine, screw you if you haven’t) position. There are many, many things that affect our health that are not in our control, unless we happen to be multimillionaires or billionaires, and possibly not even then. There is environmental pollution, which is nearly impossible to avoid completely. I’m thinking of air, water, and soil, and indoor air pollution, from stuff we clean with, personal hygiene products, the toxins in the clothes we wear, and flame retardants in furniture, and whether or not our living space has exposure to fresh, unpolluted air. In fact, things that affect indoor air quality are too numerous to list in a short response.

Also your stance is a typical male screed, that ignores mothers’ need for prenatal care. Presumbly you had a mother, and a lot of your present-day health is due to your mother’s stringent avoidance of toxins and stress, while you were in the womb, and during your formative ages, 0-5 years. Also, you may not be aware that present mothers’ umbilical cords are contaminated with at least 200 industrial chemicals, which means babies born today already carry a huge body burden of potential carcinogens and endocrine disruptors.”

Of course my argument is completely a-political and argues for a complete reappraisal of what I consider to be a fatally flawed and failing system of health care, or better called ‘disease care’, currently enjoyed or rather suffered by most in the western world.

To get a better understanding we need to briefly look at the history of the current health care paradigm. In the late 1800’s a major conference held in Paris firmly established the guild of surgeons as the supreme (health) authority while the thereto influential guild of herbalists became a much maligned underdog.

But while the surgeons have managed to maintain their hegemony their authority was soon challenged by a completely artificial construct put forward by the mighty Rockefeller family and their cronies who saw a great business opportunity for the completely artificial treatment modality with medicine and drugs mostly derived and manufactured from their very own petrochemical-assets.

Now known colloquially as #BigParms, these super multinational corporations owned by the same Rockefellers and their cronies have continually sought to discredit every healing modality or cure that could not be patented to ensure their continuing profits. Simple natural substances that actually cured disease like Borax, the supressed arthiritis cure and iodine while a long lasting war against #Homeopaty continues to rage even today. On the one hand the pundits of petrochemical medicine claim Homeopathy could not possibly work because the quantities of active substances in Homeopathic remedies are almost immeasurable but on the other hand they keep trying to silence practitioners of Homeopathy likely because in fact Homeopathy represents a real threat to their obscene profit margins.

That BigPharma has even resorted to murder to silence influential adversaries is no secret among those who keep an eye on their affairs, like health researcher, journalist and campaigner Erin Elizabeth who has, to date, recorded and documented 83 suspicious deaths of doctors, researchers scientists and journalists that were perceived to be a threat to BigPharma.

While we see user pay health care (US) and social public health care (UK, AU) not just failing but becoming so expensive that the cost of maintaining a public health system may soon bankrupt the economies of many western nations as it is already bankrupting 1000’s of individuals in those countries ‘blessed’ with a user-pay system like the US.

Even billionaires like Apple’s Steve Jobs have not been able to buy health or a cure at any price. Bucket-loads of money don’t help if you don’t understand the principles of real, natural health.

Finally I cannot finish this post without reflecting on the accusations of some political bias in my writing. I have been accused of being a #NeoCon for suggesting people should start taking responsibility for their own health to get out of the hands of BigPharma and the #MedicalMafia.

Nothing could be further from the truth, I thoroughly despise those who subscribe to the artificial construct called #NeoCon which, cleverly exploited by the #MilitaryIdustrialComplex, will inevitably lead to the complete extinction of mankind through thermonuclear war and social upheaval and chaos. Just as much as I despise the, again artificial social Marxist model where the state becomes the all powerful nanny who, ultimately, can only maintain control by further curbing personal freedom and by having to institute harsher and harsher dictatorial measures to maintain their authority. History is rife with accounts of failed socialist experiments which mostly eventually descended into brutal and bloody dictatorships.

Instead my political agenda prescribes that the individual first take real responsibility for their own actions and health management and then, as they are likely the last remaining individuals capable of such, spend their time in the service of their immediate and extended families and their immediate communities. Without judgment, just by example.